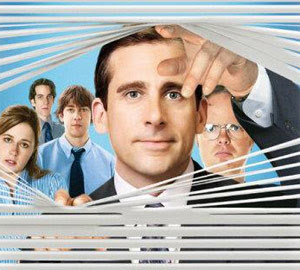 You’ve gotta love Thursday nights… as long as I can remember Thursday nights have always been the best night for TV… and for the last 3-4 years… I… along with millions of others… have spent my Thursday evenings with Michael Scott, Dwight Shrewt, and the rest of the crew at Dunder Mifflin…. I love The Office… the dry humor… the political incorrectness… the pranks Jim pulls on Dwight… even the quirky love triangles are worth a few good laughs.
THAT SAID… The Office may be funny… but it’s not FALL-OFF-YOUR-SEAT-LAUGHING type of funny. How do I know this? Well… a few weeks back I noticed that my wife and I were both rather bored during an episode… sure we laughed a few times… but it just wasn’t all that fun to watch…. then it happened again the following week. Why weren’t we laughing during The Office anymore? So the next week I decided I would actually count how many times we both laughed-out-loud during the course of a 30 minute episode… and I also counted how many time we chuckled… What did I find? First off… there is surprisingly no gray line between a laugh and a chuckle… a laugh is a laugh… and you know it when it happens… a chuckle is audible… but it’s not a laugh… distinguishing between the two is actually easy to do. So how did THE OFFICE fare?
5 Laughs, 3 Chuckles
True… it might have been a mediocre episode… but over the course of 30 minutes… I figured there should be more than 8 comedic moments. Perhaps the problem was me. Maybe my wife and I had just lost our sense of humor. Just to be sure we recorded and episode of Seinfeld to our DVR. A few evenings later we sat down to watch it… granted… it was a Seinfeld episode that we knew was pretty funny… but we had both seen it before. I figured I’d give Seinfeld the very same test I gave The Office… by counting each laugh and each audible chuckle. The results…
27 Laughs, 24 Chuckles 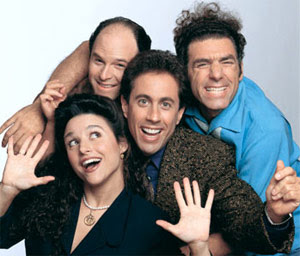 Wow… during 30 minutes there were at least 51 comedic moments (I figured we were so busy laughing that we probably missed at least half-dozen additional chuckles). At the end of the day… the situational and physical comedy of Seinfeld easily beat out the stare-at-the-camera / dry humor of The Office… at least on the Brad Ball richter scale of giggles. Still don’t believe me… just look yourself in the mirror ask yourself the following questions…. Whose funnier… Kramer or Dwight? Jim or George? Pam or Elaine? Jerry Seinfeld or Michael Scott? Seinfeld wins in every match up! Now don’t get me wrong… I’m not about to stop watching The Office… truth be told I’m really excited to find out what happens with this Michael Scott Paper Company… but The Office isn’t even in the same league as Seinfeld. I’m just glad to know my wife and I still have a sense of humor!