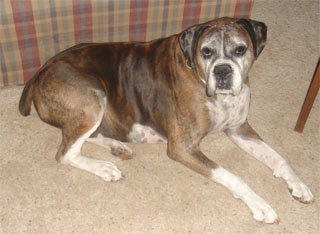 OK… I’ll be honest… I’m not really a DOG guy. I’ve got nothing against our canine friends… or any other type of animal for that matter… but I was raised in a family that had limited exposure to pets… and for some reason I’ve had particularly bad luck with the pets in my life… If you want a little history and background… read the fine print… if not… just skip to the bottom where I’ll give you my general theory about dogs and pay homage to Sam the boxer… a true DOGS DOG.

1985: BOPPERS THE DOG
I was nine years old and my parents brought home a cute black Maltese dog that we named BOPPERS (after a candy bar that was popular in the mid-eighties). I can honestly say that I loved Boppers… but that love was short-lived as my Mom sold the dog after just a few months. Mom was never really up-front about why she gave away Boppers, but the furry little mutt was never potty trained and he was a loud yapper. Family legend has it that Mom had to get up late one night and stepped on a fresh turd in the hallway. Boppers departure broke my prepubescent heart… I remember sobbing as some family from Ephraim, Utah drove all the way to our home in Sandy to pick him up.

1991: THE CANNIBALISTIC GERBILS
Our family owned a pair of Gerbils. Initially they were a novelty… but everyone eventually got bored with the rat-like creatures… except my little sister Kristy, who became the primary caretaker of the furry little rodents at the tender age of nine. Only problem was that Kristy forgot to feed the gerbils during a family vacation in the fall of 1991… and the gerbils resorted to cannibalism. Mom ended up taking the surviving gerbil to the veterinarian who charged $17 to humanly euthanize the rodent (whose tale had been chewed off)… Dad was so furious that Mom paid that much to put down the gerbil… theorizing that he could have done it humanely with the back-side of a shovel. The whole incident created a feeding-frenzy for the extended family… which culminated in the most hilarious and memorable Ball family Christmas party ever… featuring white elephant gifts… such as a gerbil guillotine and a rodent gas chamber… all available for less than $17. The laughs generated over the last 18 years from those gerbils and particularly the memories from that Christmas party back in 1991… have been worth at least 100 times that original $17.

1993: SALT AND PEPPER
Sometime in October our family acquired two kittens… my siblings named the white one Salt and the black one Pepper (how creative)! I was 17 at the time and didn’t care much for the kittens. They were around for about two weeks before Dad had an allergic reaction… then they were gone.

2001: LOIS AND BUTTON THE FROZEN PARAKEETS
I was the co-owner of two parakeets… named Lois and Button. The birds were low maintenance… but really no fun at all. Supposedly parakeets can be good little pets if you take the time to train them… but I was in college and had other things going… so I never took the time. The poor birds froze to death on a particularly cold spring day… as the heat in the apartment had been turned off while nobody was home… you’d think it’d be sad to lose your pet birds like that… but looking back… in some twisted way… I’ve probably had more chuckles than tears over the whole incident.

So my general theory about pets… is that it’s a break-even proposition… at best. You get companionship… but you also get responsibilities and messes. With some pets… say for instance, a snake… you get virtually no companionship… and all sorts of messes… and weird smells. Personally…I’d say… in the grand scheme of pets… owning a good dog is the best bet. Consider… dogs are superb companions and show an incredible amount of loyalty and love to their owner. You can also play with them, teach them tricks, and take them for a jog. Only problem is… they bark, stink, poop, shed hair, and complicate vacation plans. If you’re a dog lover… it’s all worth it… if you’re not a dog lover (like me)… it’s a close call. Personally I think every kid should have the opportunity to own a dog… and someday… probably in the next 5 years or so… I’ll get my kids a mutt of their own… but it’s not a cut-and-dry deal… dogs are fun… but they’re a lot of work.

So this past week… one of the best dogs I’ve ever known passed on to doggie heaven. Sam the Boxer was the family dog of my in-laws the Creer’s. My father-in-law brought home Sam as a puppy sometime in the early 90’s… about a decade before I joined the family. By the time I met Sam he was 70-plus in dog years. It’s true… I never loved Sam the way I loved Boppers… but I sure had a lot of respect for the venerable old dog. Sam had a lot going for him… forget about breaking even… Sam was an all around great dog to have around… as he was loyal… active… had a great temperament… plus…Sam didn’t have a lot of the drawbacks that most dogs have… he was well-trained… never barked… and he shed very little hair. Really his only drawback was that he was one STINKY son-of-a-*^%@#! By far the worst smelling dog I’ve ever been around… but it was sort of his trademark… you got used to it… kinda.

Over the last three summers, we had the opportunity and privilege to care for Sam at our house several times while Laura’s parents have been out-of-town. Sam loved the kids and the kids loved Sam. I especially enjoyed when Abby would take him for a walk. But perhaps the thing that I loved most about Sam… was that he HATED CATS. Isn’t that the way it’s supposed to be? Here in this crazy mixed up world… it was good to know that there was a real dog… a DOGS DOG out there that abhorred all things feline. As Sam approached 100 in dog years he could barely catch his breath as he trot around our backyard… but whenever he saw a cat anywhere closeby… he instantly transformed into a young pup… and chased relentlessly… it was always site to behold. So here’s my theory… there are a lot of dogs in this world… but a good dog… a DOGS DOG… will always chase a cat the way Sam did.

I say Rest In Peace to Sam… you were a great dog… and even though I’m not really a “dog guy”… and never got to know you in your prime… you have my love and respect… and I’ll catch you someday on the other side.