Leaving money on the table… lots of money! Who would ever do that… let alone in times like these? I’ll tell you who… THE GIRL SCOUTS! 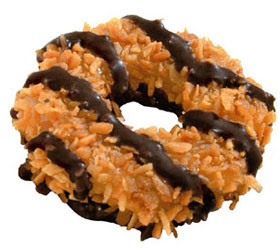 Everybody loves Girl Scout cookies (at least the Thin Mints and the Samoas) So why do the Girl Scouts only sell cookies in March? Seriously… It’s not like I’m some crazy fan of Girl Scout cookies… but I’m always good for 3-4 boxes every year… who isn’t? So this year the Girl Scouts forgot to knock on our door… and I must have been too busy to notice them in front of the supermarket. Then randomly… just the other day… my wife and I are both decide we’re in the mood for a box or two of cookies… but the Girl Scouts… they’re nowhere to be found. I passed by a couple of supermarkets… nothing. How about going online to order cookies… sorry.
Now I completely understand… the Girl Scouts don’t want to over saturate the market for their cookies. Selling them online or making them available all throughout the year wouldn’t be the answer… people would get sick of them in a hurry. But surely I’m not the only one that thinks Girl Scout Cookie season is a little short! About three years ago our family bought something like 15 boxes… figuring we could snack on them for several months… they were long gone by early May.

How great would it be to load up on Girl Scout Cookies for football season! Seriously… have you ever had a Girl Scout cookie during a football game? The answer is NO… you haven’t… just like you’ve never been snow skiing in August… it’s not even on your mind. 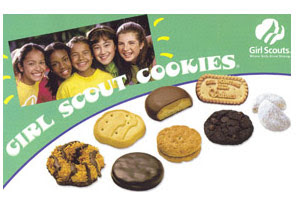 So here’s my BILLION DOLLAR IDEA… yes… it’s literally a BILLION dollars! The Girl Scouts should hire me on as Director of Cookie Sales. I’ll initiate a September cookie drive… the Girl Scouts will pound the pavement during the month of September… they’d set up kiosks at local football games… and perhaps I’d even allow for online purchases to be made during the month of September only. During the Spring… the Girl Scouts sell about 200 million boxes of cookies… but I’m confident that in September… the girls could sell even more say… 250 million boxes during the month. Your average price per box is nearly $4.00…. so my theory is the Girl Scouts could collectively generate nearly $1 billion in sales every fall… without watering down their famous brand one bit. I say… hire me on for $500,000 annually… and I’ll lead the campaign. I’d let the world know that MARCH and SEPTEMBER are the official GIRL SCOUT COOKIE MONTHS… pass the Thin Mints Please!