Skip to content
It’s the middle of winter and that means lots of cold dark nights with little to do but watch television. The other night Laura and I stumbled upon an interesting show called 17 KIDS AND COUNTING… it’s a reality-documentary show that follows the adventures of the Duggar family of Tontitown, Arkansas. Jim Bob Duggar and Michelle Duggar are the proud parents of 17 children who they raise on a rural ranch. The family espouses extremely conservative standards… even compared to what us Mormon folks are used to… quite frankly… if you were watching the show with the sound on MUTE…. you’d probably think the Duggars belonged to some sort of polygamist sect… the only hint otherwise might be that some of the boys don’t actually button their top button… and the girls hairstyling comes from the 1980’s rather than the 1890’s. 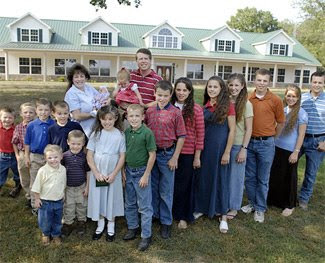 I found the show interesting and educational. Sadly… I’m sure many people in this crazy materialistic world watch the show in disbelief and disgust… but the way I see it… the Duggar’s seem to live happy (albeit very sheltered) lives… and they probably contribute to the world more than they consume. Now don’t get me wrong… I’m not about to move my family out to the middle of nowhere, forget that birth control ever existed, home school my children, and suggest to them that they should never kiss before they get married. But I’ve got no problem with people who choose to live the ultra-conservative lifestyle.

I don’t quite know what the connection is with cheesiness and ultra-conservative lifestyles… but somehow the two go hand-in-hand. Every time Jim Bob Duggar appeared on screen I could almost see the cheddar dripping off my TV set. Jim Bob was definetely the head cheese… always smiling… always happy… clean shaven… perfect hair… always modest… I got a real kick out of the guy. Funny thing is…. during the whole show he strongly reminded me of someone… but I just couldn’t figure out who… it was really bothering me… until it finally hit…. Jim Bob reminds me of BRONCO MENDENHALL. Yep… Jim Bob and Bronco must have been brothers in a past life…. they’re two peas in a pod. Everything from the hair to the calm monotone voice. I a little surprised that Jim Bob didn’t say something about a quest for perfection! Of course… with all the Duggars running around… maybe Jim Bob and Bronco are actually brothers in this life… twins somehow separated at birth. All I know is their brand of cheese looks, smells, and tastes like the same stuff. 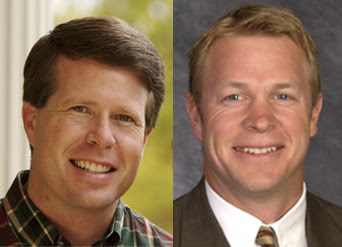