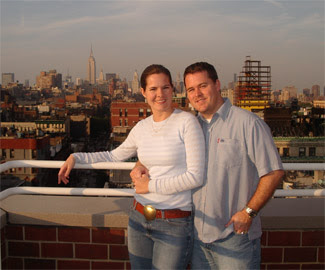 Shortly after Laura and I were married we lived in Washington DC. While we only stayed for a little more than a year, some of our favorite memories were the various road trips we made (usually about one-per-month). Washington DC’s central location made it easy to get away for the weekend… and we took full advantage of it… traveling to New York City several times, and also on trips to Philadelphia, Cleveland, Palmyra (New York) and Harmony (Pennsylvania), Outer Banks (North Carolina), Gettysburg (Pennsylvania), Wintergreen Resort (Virginia), and several other places.

During this same time, I became good friends with a girl at my work; we were both managers and worked together on several projects. I was once telling her about the weekend Laura and I had spent in New York City – come to find out, this girl had never been to New York City. I was even more surprised when she told me that she had never been to Philadelphia (just 90 minutes away)… and she had only been to Washington DC to see the monuments once in her entire life despite having grown up in Frederick, Maryland just 50 miles down the road! I found it interesting that this woman… smart and sophisticated as she was… had traveled so little in her life, and hadn’t even been to some of the greatest destinations in our country… despite the fact that many of these destinations were virtually in her own back yard.

In a twist of irony… something dawned on me this summer. Here I’ve lived in Salt Lake Valley for 26 of my 32 years… every day staring at the beautiful mountains along the Wasatch front… and (with the exception of Mount Timpanogos), I have not hiked to the summit of ANY of the beautiful peaks that make up our eastern skyline. This had to change! Unfortunately I didn’t really get a chance to make good on my goal… until last weekend.

On Saturday morning, I head out with my brother Monty and my friend Abe Denzer to conquer the north face of Mount Olympus (which in my opinion is the most beautiful mountain surrounding Salt Lake City). It turned out to be an AWESOME experience… and one of the best hikes I have been on in many years. The three of us followed an obscure path as we scrambled straight up the face of Mount Olympus until we reached the northern summit (there are 5 different summits on Mount Olympus – the South summit is by far the most popular). The weather was absolutely perfect… the terrain was rugged and challenging, and the views were unbelievable… but the best part of the day was when the three of us came face-to-face with a group of about 10 mountain goats as they ascended a cliff just 500 feet from the summit… it was amazing to see those creatures up close… I only wish I had a better camera with me at the time!

The entire day we passed nobody coming up or down the trail… until the last ½ mile when we… by total chance… ran across some old friends at the bottom of Neff’s Canyon who kindly gave us a ride back to our vehicle – located at a different trailhead about a mile away (special thanks to Loralee and Melanie Jessen)! Also… special thanks to my wife Laura… and Abe’s wife Andrea… who were understanding and forgiving despite the fact that our hike lasted 5 hours longer than originally planned.

I wonder to myself… what if my old friend from Washington DC were to come to Salt Lake City for a visit… would she be shocked to find out that I hadn’t hiked any of the beautiful mountains nearby? Probably! Reminds me of the old Indian saying… “Before I judge a man, let me first walk a mile in his moccasins.” Or in my case… let me first hike a few more miles and up a few more mountains (hopefully in a good pair of hiking boots).

Here on some hikes I intend to check off my list over the next couple of years: Grandeur Peak, Lone Peak, Pfiefferhorn, Broad Forks Twin Peaks, Dromedary, Thunder Mountain, Mount Raymond.