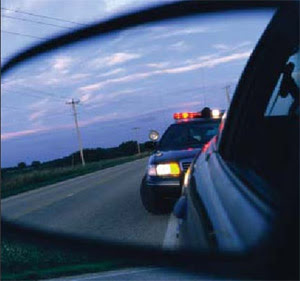 It happened again… On July 7th around 8:30am I received my 11th speeding ticket. 15 years driving and I’ve been zapped 11 times for driving too fast. Altogether I figure that I’ve paid over $500 for speeding violations. Funny thing is… I’m really not a lead-footed driver… you can even ask my wife… I’m just an average-Joe driver when I’m out on the road. Sure… I’ll pass grandpa on the highway… but it’s not like I’m a 21-year-old with gobs of testosterone behind the wheel. Nevertheless… over the years I’ve gotten very used to that queasy feeling that comes when you spot a cop in your rear view mirror… and it’s never a good feeling

My theory is that getting pulled over for a speeding violation is a lot like the repentance process… wrapped up in a 10-minute time frame. Consider… your first instinct is to hide what you’ve done (usually by stepping on your breaks). Next comes the realization that you’ve transgressed and the sick feeling in your gut (sorrow). Following this is an awareness that you can’t continue on in your sinful ways without getting in bigger trouble (good luck trying to outrun that cop). Then comes the confession… to the police officer… followed by a penalty (restitution) which is never fun… and most of the time it ends up being more difficult (or expensive) than you thought it should have been. In some cases… if you’re really a bad driver… you go to driving school where you’re given a manual to read… whereas… if you’re a bad sinner you may end up going to the bishop and he’ll give you Miracle of Forgiveness to read. In the end… life goes on as normal… and you’ll probably have to repeat the process again someday.

In my case… that someday happens about every 1.3 years. I’m predicting to receive my next speeding ticket sometime around October 25, 2009. For those who are interested… here’s a diary of my speeding ticket history. It’s a little long and might be a bit boring… Nevertheless, enjoy…

FEBRUARY 1, 1994… The invincible mind of a 17-year-old
My first ticket and certainly the one I deserved the most. I was driving my Dad’s company car, a 1994 Ford Crown Victoria and heading northbound on 1300 East around 9400 South. I was street racing my friend Chris Bluemel who was driving a gutsy 1985 Honda Civic hatchback. It was around 10:00pm and we were doing about 75mph in a 40mph zone when a county sheriff tagged us passing by Pebblebrook golf course. I still remember my exact thought when I first saw the flashing lights in my rear view mirror… “we can outrun this cop… he’ll never catch us both”… gotta love the invincible mind of a 17-year-old driving an 8-cylinder vehicle! Turns out that my friend Chris – ever the obedient one – pulled over first and I followed. The cop ended up being a women… once I realized this I actually turned the radio dial to FM100 thinking that she might somehow get the idea that I’m really a mellow, peaceful guy… and go easy on me. While I doubt that tactic worked… she did end up appreciating the fact that we both pulled over together and gave us a ticket for only 15mph over-the-limit. I told my parents about the ticket but never did tell them the whole story about racing Chris…. probably a good thing… my parents let me take the Crown Victoria out to a big dance just two weeks later.

JULY 6, 1995… Didn’t know my junker car was capable of speeding
During the summer of 1995 I worked as assistant manager at Fleet Foot, an athletic shoe store in the Southtowne mall. I was on the way home from work around 6:00pm driving a 1982 Honda Accord hatchback (the main car I had during my teenage years). I ran right into a speed trap heading eastbound on 9400 South (around 1200 East). Coincidently the police officer tagged me with his radar gun in almost the exact same spot where I received my first ticket (but heading a different direction). He was a jerk and ticketed me for 15 mph over (I could swear I wasn’t going that fast!). I still occasionally see Sandy police officers who set up a speed trap in that very same spot…. and I’m still cautious not to speed anywhere near that area.

1996-1997… Learning the ways of the Jedi
I was pulled over three times while serving a mission in upstate New York. On each of these occasions I was warned but never received a citation. Call it good karma… the spirit… an out-of-state license… or the three Nephites… I should have definitely been ticketed at least twice but for whatever reason I got off scott-free… let the faith promoting rumors fly! About 4 weeks after I got home from my mission I was pulled over in downtown Salt Lake City while on a date. I was baffled as to why the cop had pulled me over (I was going about 20 mph at the time). Turns out he complimented me on my defensive driving and gave me a free pair of movie tickets. I told my date that the movie tickets weren’t worth that sick feeling in your gut that comes when you get pulled over by a cop… she agreed. By 1998 I had been pulled over 6 times and received only 2 citations. I started to believe that I had some Jedi mind trick powers that enabled me to receive warnings from police officers rather than tickets. Such was not the case…

NOVEMBER 13, 1998… Alec Baldwin lookalike
I was driving my 1992 Acura Legend to Idaho Falls when I was pulled over in a construction zone in North Ogden (I-15 in North Ogden always seems to be under construction). All I remember is that the cop came out of nowhere. When issuing me the citation he was a bit talkative and told me that I looked like Alec Baldwin. I was lucky that the court didn’t make me pay double for speeding in a construction zone.

SEPTEMBER 30, 2001… If I stay behind him he can’t pull me over
I had my cruise control set on about 85 while driving from Las Vegas to Salt Lake City. About 30 miles north of Cedar City I noticed a highway patrol car in the slow lane about ¼ mile ahead. I immediately slowed down (trying not to pass him). But he ended up slowing down to about 45 miles per hour (with me right next to him in the fast lane) and finally he turned on his lights. I remember him telling me… “this isn’t fast Sunday”… actually it was.

MARCH 14, 2002… Don’t find yourself running late to class
Late to a finance class during my senior year at the University of Utah. I was going about 10 over along 1300 East around 1100 South. The cop had set up a speed trap on Harvard Avenue and he quickly pulled me over and issued a citation. With the number of students speeding to classes every morning at the University, I can only imagine that is a popular spot to set up a speed trap.

SEPTEMBER 25, 2002… Name dropping to no avail
Driving south on 2700 West around 7000 South in West Jordan. It was dark, probably around 9:00pm or so. The West Jordan police officer pulled me over and didn’t waste time issuing me a ticket. Turns out that a guy I knew in my ward worked for the West Jordan police force. I dropped his name hoping that the officer might go easy on me… no such luck.

AUGUST 16, 2003… The Phantom cop of North Ogden
Driving with some girls up to Bear Lake for an afternoon of boating. Somewhere between North Ogden and Brigham City a cop came out of nowhere. It was eerily similar to the incident in 1998 where I was pulled over by a cop along the same stretch of I-15 not far from the Smith and Edwards surplus store. I was driving my 1998 Lexus ES300, which I had just got a month earlier and I was also using a radar detector that my Mom had given me for as a Christmas the prior year. The radar detector gave me no warning… not even a little blip… I figured I had it on the wrong setting… until…

SEPTEMBER 1, 2003… My radar detector wrongs me for the last time
Just two weeks after being ticketed on the way to Bear Lake, I was driving from my office in Murray over to meet some friends and I got picked up on 4500 South and 700 East heading eastbound. I had my radar detector on and it didn’t give me any warning until the cop was behind me flashing his lights. I actually told the officer that my radar detector didn’t work, he explained that the Murray police use some sort of Laser detection system that is more advanced than the best radar detectors. After receiving this ticket (my fifth in just two years) I ditched my radar detector and made a commitment to slow down my driving.

March 27, 2006… The least deserved and most expensive ticket
My most upsetting ticket by far. I was with my family and driving north on I-15 from Las Vegas to St. George. It was 7:00am and I had a meeting in St. George at 8:00am. I really needed to be there on time and I had the cruise control on about 85mph. I figured any cop would give me a little leeway since I was driving in the middle of the desert and I was (literally) the only car on the road. About 40 miles south of Mesquite I was passed by a Jeep Grand Cherokee that was probably going about 2 mph faster than my car. I let him get about ¼ mile in front of me and then I sped up to 87 (figuring he would act as a shield of sorts). He got pulled over about 10 minutes later… I saw it happen in front of me and slowed down to 75. Two minutes later a cop appeared out of nowhere and pulled me over. He cited me for going 88 in a 75 (which was a stretch). The fine was for $300. I wrote a letter to the judge and got it reduced to $120. The silver lining? Even though I was late to St. George… I still landed a big deal at that meeting which lasted for over a year.

September 15, 2006… How about a warning for my 30th birthday
Heading to work driving north on Highland drive around 8600 South. A grumpy Sandy police officer had set up a speed trap trying to catch people going to fast down a hill. He pulled me over and I was proactive in asking him if I could get off with a warning… and I also tried to hint to him that it was my 30th birthday (which was actually the day before). My efforts were in vain… he was rather smug… and ticketed me for 13 over-the-limit.

July 7, 2008… Miss an exit… that’s an expensive mistake!
Heading downtown and missed the collector exit I normally take. I ended up getting off on the 600 South exit and didn’t slow down fast enough from my freeway speed. A Salt Lake City police officer had a nasty speed trap set up around 500 West and he nailed me speeding through the green light. I actually thought we was a pretty nice guy because he only gave me a ticket for 5 over-the-limit despite the fact I was going about 15 over… I changed my mind about him when I went online to pay my ticket and found that it cost me $82.