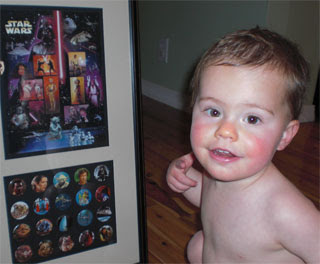 He’s 18 months old… He’s been walking for months… He loves to climb and explore… He’s starting to talk… and he’s been massively indoctrinated with Disney princesses by his older sister. It was time to take action! So this past week I introduced my son David to the world of Star Wars!
Now don’t get me wrong… I’m not some Star Wars nut case… I don’t speak Ewok, I don’t know the population Alderaan, and I certainly don’t think Carrie Fisher is the hottest babe ever. But my theory is… the little fella should at least know about Yoda, Luke Skywalker, and Darth Vader before he starts idolizing Belle and that goofy walking candlestick.
So last week I started showing him the Star Wars collector buttons. First things first… SHOW HIM YODA… I WILL. David has now memorized Yoda and points to Yoda’s button every morning after he wakes up… next up…Han Solo (I think I’ll teach him about all the good guys first). Maybe in the next few weeks I’ll sit him down and try to watch a movie with him… not that I think he’ll be able to sit through it…. I just need a little relief from that DREADFUL Enchanted movie… Yes… I know… Enchanted is a good movie…. but I’m so sick of hearing that Happy Working Song for the 50th time… please pull it off your blog! 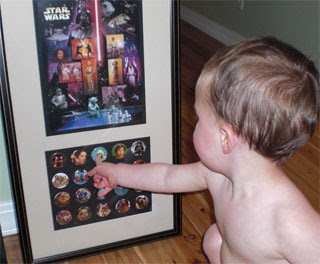 Anyway… I’m excited about this whole Star Wars thing with David… I just hope the whole Star Wars obsession doesn’t spiral out of control to where he thinks he’s a Stormtrooper by age four. So I’ll watch him close and reign him in if I need to… but quite frankly… I’m more concerned about the day I have to tell him that George Lucas made 3 mediocre prequels… I’d rather just start him with episode 4 and never let him know that the Phantom Menace… and those other two flicks even existed.