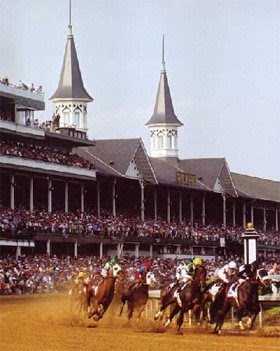 Some people might think it’s ridiculous to watch a program for 90 minutes just to catch a two-minute horse race… and they might be right. But I look at it a little differently… My theory is that if there’s a lot of FLUFF and HYPE… or an exceptionally LONG WAIT for something… more often than not… THERE’S A GOOD REASON WHY. The Derby was awesome… even my one-year-old son loved watching it! The Super bowl and American Idol are also marinated in fluff and hype… and they’re both pretty entertaining as well. I made it to a Jazz playoff game last weekend… it was also totally worth the hype! Sometimes I wonder if it’s a chicken-and-egg situation…. Does excessive HYPE and/or a LONG WAIT… actually make something better than it really is? Case-in-point… Café Rio….remember how tasty that pork burrito was after waiting in line for 30 minutes? Now days there’s rarely a long line at Café Rio… and I’m never hungry for the place any more.

Generally speaking the Kentucky Derby Theory is a bit like the old saying “YOU GET WHAT YOU PAY FOR”… but there are exceptions…. Here are a couple: 1- CRYING KIDS… it doesn’t matter how much fluff, hype, or aggregage coolness an event has… once you add fussy kids into the equation… it’s rarely worth it (example: fireworks on the 4th of July). 2- DISNEY… two hour lines and six dollar hot-dogs never seem to live up to the hype… but then again… I’ve never been there with my own children.