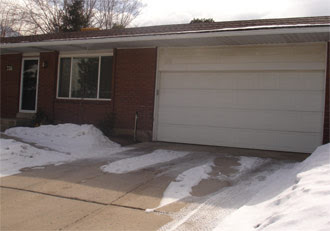 As an obnoxious teenager I once spilled a Big Gulp in the middle of the grocery store… it splattered everywhere and for a brief moment I was dumbfounded and had no idea what to do next. Then my friend suggested to “ignore it… and it will go away”… so we hustled down a few aisles… and moments later we heard a voice over the intercom “wet cleanup on aisle seven” … the IGNORE IT AND IT WILL GO AWAY THEORY was born.
The theory worked well for me as a teenager… curfew rules, strict parents, and irrational girlfriends all seem to go away when you ignore them. Unfortunately as an adult… the theory isn’t as universally applicable… mortgage payments… fussy kids…. body odor…. and a variety of other things typically get worse when don’t take care of them.
Fortunately for me, there are instances where this theory is still applicable… Right now I am banking on it as I ignore shoveling the snow off my driveway. I have retired for the year from shoveling snow! I’ve had a miserable time attending to my driveway this winter and I no longer have the fight or will to continue.
Of course the whole thing is my own fault… I’m the one who signed the papers to purchase a North facing house… I should have known better! Spring may be just around the corner for most of Utah, but it typically arrives about 6 weeks later in my front yard. There is still 3 feet of snow piled up next to my driveway… and ice still accumulates almost every morning on the downward concrete slope.
I don’t normally consider my self an envious person, but this time of year I am certainly jealous of my across-the-street neighbor Dennis Barber. This past weekend he was washing his car in a t-shirt and shorts while his family was socializing on his front porch… I could swear the temperature is about 20 degrees warmer on his side of the street this time of year! There I was slipping on my icy driveway trying to get my kids out of the car as Dennis was basking in the sun and prancing around like it’s Memorial Day weekend just a few feet away.
Forget about wishing I was on vacation in Hawaii or the Caribbean…. I just wish I were 50 feet away on the other side of the street! I often wonder to myself… how much more would I have paid for this home if it faced South instead of North… $1,000…. $5,000… more? I’m not sure I can’t quantify the answer… One thing is for sure…. ignoring the snow on my driveway will be the easy part… ignoring Dennis as he frolics around in the warm sun of early Spring will prove to be much more difficult.