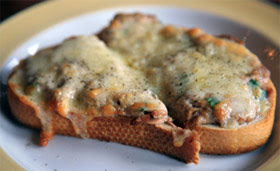 Oh how I LOVE A GOOD SANDWICH… now comes another sandwich-related theory… call it the TUNA MELT THEORY. Here’s the story: Back when we first started to date, Laura would often make me tuna melt sandwiches for lunch. She used a multigrain bread and some delicious cheese…and served it open-faced style. Laura’s tuna melt quickly became one of my favorites for lunch. The sandwich was so good you could argue that it expedited our courtship (well that might be a little bit of a stretch).
The tuna melt era came to a tragic and abrupt end sometime in the Spring of 2004. Laura accidently used some rotten tuna one day and my love affair with the sandwich ended after one rancid bite. Neither of us has ever had a tuna melt again – UNTIL LAST WEEK. Laura decided to prepare some tuna melts for lunch one afternoon (after triple checking the expiration date and whiffing the tuna about half-a-dozen times). It was with much trepidation that we both took the first bite (I was surprised how nervous I was). Sure enough, Laura’s tuna melt was very tasty and perhaps my fear of tuna melt sandwiches is… well… melting away.
So What is the TUNA MELT THEORY? Remember the famous saying that goes something like… “trust takes a long time to earn but it can be lost instantly”… I always thought that applied to friendships and relationships… my theory is it applies to FOOD as well… it doesn’t matter how much you love a special sandwich, spaghetti, casserole, or dessert… one rancid bite could ruin it all for a long time.
UPDATE: In my quest for a good sandwich shop I’ve come across two places that make a respectable sandwich. Both have passed the minimum Brad Ball requirements for a TASTY CHEESESTEAK SANDWICH.
Joni’s Deli
52 E. 1700 South
Salt Lake City, Utah
Ernie’s Sports Deli
182 W. Center Street
Orem, Utah