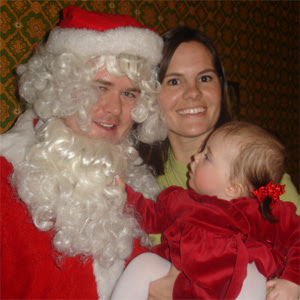 I am not quite sure when I figured out the whole Santa Claus thing… I think it was a gradual process… perhaps taking 7-8 years altogether. Sometime around age 5 or 6 I probably had my first inkling of doubt as I realized an obese man dressed in a silly red suit would have a difficult time squeezing down our tiny chimney and then jumping out of the fireplace sans soot on his hat.

Certainly by age 10 or 11 I had issues with the whole Santa Claus story as I became aware of the enormous logistical problems Santa might have delivering gifts to billions of people worldwide. That said… I must give my parents credit… they did a good job selling the story… and I was happy to play along… after all… what’s not to like about Santa (and all the gifts he brings).

As the oldest child, the fable probably played out longer than it does for most… as my parents continued the Santa Claus traditions with my younger siblings. Interestingly enough… I was about 16 before I heard verbal confirmation (from a high school teacher) that Santa Claus was in fact FICTIONAL… obviously I had figured out the hoax by then… but I vividly remember my junior year in High School being the first time I ever heard that Santa Clause was phony from an authoritative source.

I think my oldest daughter ABBY is set up for a completely different Santa Claus experience than I had as a child… you see… at the tender age of 2 1/2 she’s already figured out the secret about Santa Claus. It all started around Christmas a couple of years ago when I jumped into a Santa Claus suit to play the roll during the Ball Family Christmas party. Afterwards somebody took a picture of our little family and it turned out to be a CLASSIC. The picture shows Abby (as a 8-month-old baby) pulling down my beard and noticing that Santa has a strangely familiar look… it’s one of our favorite pictures… and we’ve included it in various slide shows and scrapbooks over the past couple of years.

Now as a curious 2 year old, Abby has seen the picture multiple times in multiple places and has obviously figured out that Daddy is Santa Claus… a claim that is tough to refute… especially considering the obvious visual evidence! Recently somebody asked her about Santa… and Abby was quick to proclaim that “Daddy is Santa” something that we’ve all had a good laugh over.

So I guess the SECRET ABOUT SANTA CLAUS THEORY is…. if you don’t want your kids to find out about Santa Claus… don’t become Santa Claus.