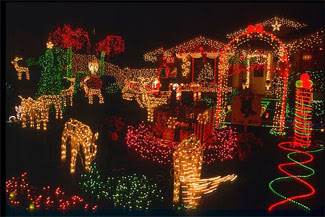 Some things in life get easier with practice and experience… My theory: Hanging up Christmas lights IS NOT one of those things. Each and every year as I seemingly devote more time and energy into the process, I find it becomes more frustrating and difficult.
This year I vowed to get the lights hung before the first big snow of the year… and I was on track… until Walmart screwed up my plans. You see… one evening in November I got out all the lights and found that several of the strands from last year had burned out. I made a run down to Walmart to pick up some new icecicle lights. By the time I got back I was running out of daylight… I still might have finished the project but 2 of the 3 light strands I had just purchased from Walmart were defective. The next free evening I had to finish hanging the lights came about a week later.
Sure enough the first big storm hit on the eve before I planned to finish the job. I ended up returning the Walmart light and I purchased some from Target instead. GOOD NEWS… they weren’t defective. BAD NEWS… after I spent two hours getting them up I realized they didn’t match the other lights I had already put up (the icecicle strands were shorter). To fix the problem I had shorten the old strand of icecyle lights by tying about 2 dozen granny knots… and of course you can’t really tie knots with gloves on… I think my hands are still in the process of thawing!
Sometimes I wonder if it’s worth it…. all so my house can light up like a ferris wheel during the month of December (no that’s not my house pictured above). I heard somewhere recently that you can hire some professionals to come hang your lights for only $3.00 per linear foot… WOW… that’s more than I paid to have my raingutter replaced. At the end of the day I have a new found respect for the Temple Square light crew… and for the one house in the neighborhood that always goes “all out” on Christmas decor and lighting (doesn’t every neighborhood have such a house)? If my memory is correct the GREEN GRINCH who stole Christmas use some sort of dart gun to hang back all the lights when he arrived back in town after his heart grew three sizes bigger? Now that’s what I need… But you can be sure I won’t buy it all Walmart!