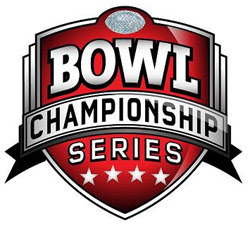 So what is ULTIMATE CONSPIRACY THEORY? No… it has nothing to do with President Kennedy or the moon landings. The BCS (Bowl Championship Series) is the ULTIMATE CONSPIRACY THEORY. For those of you who don’t know… the BCS is the elitist setup that College football uses to determine who plays for the national championship… and it’s an absolute SHAM.
So Who’s behind this conspiracy? Well… it’s a handful of powerful conference commissioners (such as Jim “Beelzebub” Delany of the Big 10), some fat-cat TV personnel and a few smug Bowl Game executives that want to keep their power and money. In my humble opinion COLLEGE FOOTBALL is the greatest sport ever… the pageantry the rivalries and the competition are unmatched. Yet the sport continues to pick its national champion by using error-prone computers and human pollsters (much like figure skating) rather than settling it on the field of play like every other team sport.
So each year… in early December… I engineer a 16-team playoff system and create a nice little bracket matching up 11 conference champions and 5 at-large teams. I throw together a few rules and scenerios and then post the thing on my web site and onto a few college football message boards. Without fail… every year my playoff post creates a bit of a stir and spurs some lively conversation about “what might be” if college football had a postseason tournament. Here’s the link:
2007 College Football Playoff
Hopefully someday this miserable conspiracy will end and we’ll see a college fooball playoff. If that happens, expect a hear the words DECEMBER MADNESS enter into the American lexicon. Until that time… I’ll just spend the holidays drinking my egg nog and watching meaningless bowl games…. nothing like watching Cincinnati vs. Southern Miss in the PapaJohn’s Bowl!