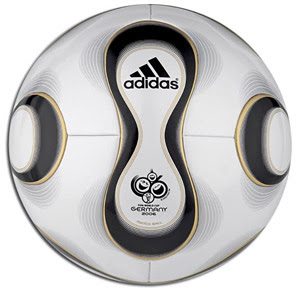 This past Thursday about 20,000 soccer fans filled the stands at the brand-spankin-new Rio Tinto soccer stadium in Sandy to cheer on Real Salt Lake. My wife went to the game with her older sister and younger brother – all three are excellent soccer players and big fans of the sport. I stayed home to tend the kids…but the truth is… I wish I could have been there with them. I’ve never been to a boring soccer game. 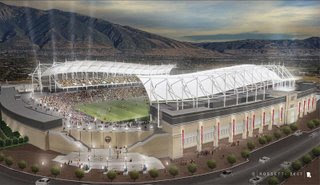 I still don’t quite know how to feel about soccer… I’ve been to a few games and the action is always exciting… I really get into it… but the game is missing something… actually… it’s missing a few things. Soccer is something that could be amazing if you made just a handful of simple tweeks. To me… the sport comes to represent those things in life just missing a few ingredients. Have you ever made chocolate chip cookies… but accidently left out something? Usually the cookies turn out bland and dry. It’s amazing how just one teaspoon of a certain ingredient can impact an otherwise perfect batch of cookies. Well… THAT’S SOCCER… and here’s how I would tweak the formula.

ADD SOME SUGAR… AND DOUBLE THE RECIPE
Soccer needs more scoring… nobody likes to go to a scoreless game. The sport has plenty of action filled moments, but far too many of these end with the referee blowing his whistle for the dreaded OFF SIDES call. In every other sport… the breakaway play is heralded as the most exciting moment in the game. Basketball has the fast break for a slam dunk, Football has the long bomb, even in baseball (and otherwise ridiculously boring sport) you can break away to steal a base. In soccer… 80% of these exciting breakaways are whiffed out by the sound of a whistle just as the roar of the crowd is reaching a climax. If soccer would just modify the off sides rule… scoring would increase drastically… and the excitement levels would rise to a new level.

A LITTLE LESS SALT
Nothing is worse than going to an exciting game only to see it end in a tie. It took college football decades to figure this out… but they finally got it right… and the sport is better for it. Soccer still hasn’t learned… if you go to a few soccer games this next year… plan on kissing your sister. The ridiculous thing is that soccer has some exciting tie-breaker rules already in place… but these rules are only used in the post season. Soccer officials simply need to implement the shootout whenever a regular season game ends in a tie. I’d actually put down my styrofoam cup of Dippin’ Dots to see a good shootout!

COOK FOR ONLY 90 MINUTES
I still get confused when I go to a soccer game because the clock ticks up… not down… meaning that the game ends when the clock hits 90:00 instead of 00:00 like every other sport known to man. I could learn to live with this…. but the problem is that soccer games never really end when the clock hits 90:00… there’s this crazy little extra time added on to every game. You see… in soccer there are no time outs… the clock doesn’t stop when the ball goes out of bounds… or when someone gets hurt… it just keeps ticking, ticking, ticking into the future. Once regulation ends… the game continues on for an undetermined amount of time until the head referee decides that the game should be called. That’s right… there’s only one person in the entire stadium that knows when a soccer match ends… the head referee. No counting down to victory… no superheated intensity during the final seconds… only guessing. Soccer should simply change the rule so the clock stops when the ball goes out of bounds or when someone is injured. Keep the clock counting upwards if you want… but ditch this extra time business… and have the game finish right at 90 minutes… use the time stoppages to break away to some commercials… soccer could use the ad revenue that would come from a few beer commercials. It’s a simple kill-two-birds-with-one-stone solution… change a dumb rule to make your game more exciting and get more ad revenue in the process.

Soccer could have been my favorite sport… it could have been everyone’s favorite sport! Virtually every kid in America grows up playing little league soccer… it’s a rite of passage into team competition… In many parts of the world soccer reigns supreme… but here in America it’s still a starter sport… a grade school fix that gets the competitive juices flowing… until our bodies and minds mature to the point that our junior high gym teachers can introduce us into more complex… and some might argue… more exciting sports. To me… the excitement isn’t the real problem… the recipe just needs to be tweaked… until that happens… we’ll probably continue to see empty seats in 20,000-person-capacity stadiums… which is fine by me… because I enjoy the good seats. Go REAL!