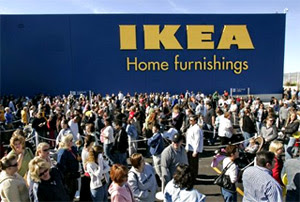 Psychology in the world of sales and marketing is very real. Much of my career thus far has been spent crafting marketing and advertising strategies for various different companies. One thing I can tell you… PEOPLE WANT TO FEEL LIKE THEY’RE GETTING A GOOD DEAL… if you can create an marketing strategy that makes people feel like they’re getting a good deal… you can generate a lot of business. Certain companies do a very good job at this…. consider…
Companies like Verizon, Coca-Cola, Apple, McDonald’s, & RC Willey (local) do a superb job of building their brand… in most cases their advertisements focus not on price, but rather the value or quality of the product or service being offered. This is known as “pull marketing”. Ultimately consumers associate the given brand with value and will pay a reasonable price for the product or service.
Other companies use “push marketing” tactics by focusing on price, incentives, or coupons. Car companies are notorious for doing this… especially on the local level… Larry H. Miller would much rather tell you about the $2500 rebate or “red tag sale” then he would about the quality of service at his dealerships.
Ultimately the goal in advertising, is to tell the story… over and over… until people believe the message… and it becomes embedded in their mind. Once the message is lodged in peoples minds… it becomes a powerful force that is extremely hard to reverse (regardless of whether or not it’s true).
There are a handful of companies that have such a superb reputation… or do such an amazing job of MAKING PEOPLE FEEL LIKE THEY’RE GETTING A GOOD DEAL… they’re marketing efforts become almost spontaneous. These businesses hardly need to advertise at all…. because people just naturally feel like they’re getting a GREAT DEAL all the time.

IKEA instantly comes to mind… people are drawn like zombies to the Scandinavian Big Blue Box. IKEA could instantly double the price of everything in the store and people would still be lining up for meatballs, chocolate, and cheap furniture. 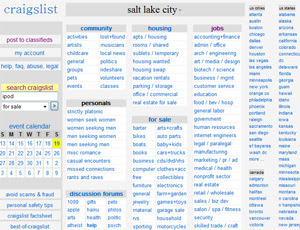 Of course, CRAIGSLIST also comes to mind… Remember those psychedelic 3D posters that were popular back in the mid 90’s… the one’s where you would stare at them with your eyes cross for about 5 minutes… then all the sudden a subliminal 3D object would appear…. well… Craigslist reminds me a lot of those posters…. it’s such an ugly utilitarian web site, I am almost certain Craig Newmark (founder of craigslist) has coded in some subliminal message behind all those blue links… if you stare at your screen long enough with your eyes crossed you’ll discover a message that reads…. “Junk for sale at amazingly high prices”.
I permanently gave up as a BUYER on Craigslist a few months ago after my wife had me run across town to investigate a used stroller… like most everything else I’ve found on Craigslist, it was overpriced and reeked with cigarette smoke.
Yet as a seller on Craiglist I’ve had some incredible luck. 3 years ago my wife and I sold every last piece of furniture in our Washington DC apartment on Craigslist before we moved back to Salt Lake City. We even sold a book stand for$25… the same price we paid for it a year earlier at Target. Just a couple of weeks ago, I sold my used Ipod Nano on Craigslist for $150… some poor guy drove over 50 miles from Tooele to my house in a snow storm to buy my used Ipod Nano when he could have purchased a brand new one for less than $20 more… all the while saving him the time, gas money, and giving him the option of picking his own color.
Thinking back I almost feel guilty selling my Ipod to that poor guy… then I remembered an old Murphy’s Law… “IT’S MORALLY WRONG TO ALLOW SUCKERS TO KEEP THEIR MONEY”. My theory? At the end of the day WE ALL TAKE TURNS BEING THE SUCKER.