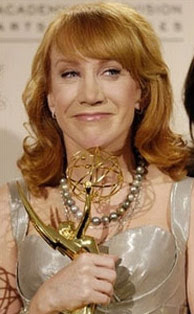 The other night at the Emmy Awards ceremony an actress/comedian named Kathy Griffin (pictured above) gave a rather blasphemous acceptance speech. I caught the video clip on a newscast and was rather surprised that a public figure would say something so offensive…. check that…. actually I wasn’t so surprised… Rosie O’Donnell and Sean Penn have said some equally outrageous things in the past few years…. but as a religious person, Kathy Griffins comments had a certain STING to them. I won’t post the video (I am sure you can find it on YouTube if you really wanted to) but here is exactly what she said in her acceptance speech…

“A lot of people come up here and thank Jesus for this award. I want you to know that no one had less to do with this award than Jesus.” She then goes on to say…. “This award is my god now!”

Regarding this I found a very clever article written by a religious correspondent named Lauren Green. The article explains in detail how JESUS IS ENTIRELY RESPONSIBLE for Kathy Griffin receiving her award. Her historical logic is tough to refute. I highly recommend the article (it’s a quick 2 minute read)…. CLICK HERE TO READ