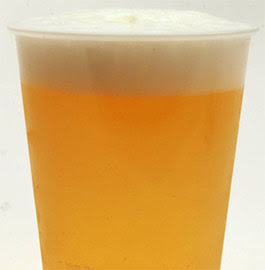 Early fall is perhaps my favorite time of year… the weather is great… the fall colors are beautiful… and of course there’s football. I absolutely love going to football games… and I usually make it to 5 or 6 each year… there’s nothing quite like the emotion and excitement of a good game on the gridiron.

Here in Utah, our football experience is a little different… In most parts of the country, football is an all-day affair… tailgating begins early in the morning and often goes on long after the game is over. But tailgating for us teetotaling Mormon’s is akin to opening a 12 oz can of Sprite and munching down some Rice Crispy Treats. Aside from a few hundred Utah fans… tailgating (and the pregame pageantry that accompanies it) is pretty much non-existent in these parts.

While I’m intrigued and perhaps a little jealous of tailgaters… there are some quirky things that I don’t understand relating to the beer consumption that goes on at most sporting events… it’s not that I’m against drinking beer… go ahead and throw back a few… I see no problem with guzzling down a Miller Lite… so long as you haven’t made a commitment not to drink alcohol (as I have). Here are just a few small gripes…

Last winter at a Utah Jazz game I witnesses a half-drunk guy spill 2 filled-to-the-brim beers all over a lady after he tripped while walking up the stairs to his bleacher… our whole section reeked of alcohol for the rest of the game… how pleasant! Why can’t sporting venues do us all a courtesy and serve beer with a lid and a straw… is that too much to ask for? My Theory… if you want a real emotional experience at a game… just sit right in front of a loud obnoxious fan with a filled-to-the-brim cup of beer in his hand… it’s nerve racking to say the least. 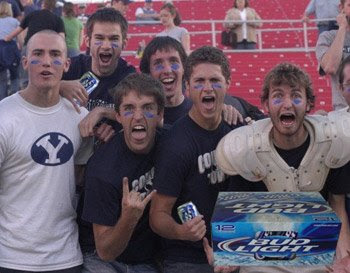 Before anyone comments about how wonderful it is to attend a game in Provo, Utah because BYU fans don’t drink beer… let me tell you of an experience that I had two weeks ago. While in Seattle with a friend, I attended the BYU-Washington football game. As I was approaching the stadium I passed by two BYU fans… fully outfitted in their “quest for perfection” t-shirts… sipping down some Bud Lite. Unfortunately I didn’t pull out my camera phone fast enough to get a good picture… so I used Photoshop to accurately recreate what I saw… just call them… Real Fans of Genius… Here’s to you Mr. Honor Code Loving BYU Tailgaters!