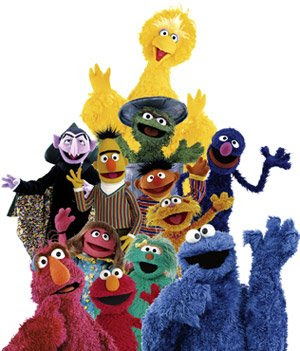 Last weekend, while browsing Comcast’s On-Demand menu I discovered several episodes of Sesame Street. I thought it might be entertaining for the kids to watch an episode… and a nostalgic experience for me… so I hyped it up to Abby and David for a few minutes… then we all sat down together and began watching Big Bird and friends prance around. It was the first time in probably 25 years that I’ve watched a full hour-long episode of Sesame Street.

I think my kids were a little intrigued that I knew the words to the opening song “can you tell me how to get… how to get to Sesame Street”. Deep down I had this hidden desire that my kids would come to love Sesame Street… and perhaps (with a little luck) Sesame Street could enter into the regular morning rotation at the Ball family home and compete with Dora the Explorer and that pansy Little Bear!

Well, I was right about one thing… Sesame Street was a very nostalgic experience for me. The programming hasn’t changed too much in 25 years… all of the music was very familiar… it still has that funky 70’s sound to it. The counting and rhyming features and the goofy muppet characters are all the same as I remember. As I expected Sesame Street is still most ethnically diverse program in the world (edging out LDS church missionary videos).

All together I wasn’t overly impressed with Sesame Street. This may be a bit of a stretch… but my theory is that Sesame Street is directly responsible for the many of the cultural problems that currently plague Generation X.

Take for instance Cookie Monster… what’s he all about? Not only does he promote bad table manners… but he glamorizes the ferocious eating of fattening cookies. It’s no wonder that this country has an obesity problem… an entire generation grew up watching Cookie monster wolf down over 3 dozen every day for 30+ years. I can tell you without a doubt that I am addicted to chocolate chip cookies… and now I completely understand why… Cookie Monster! Every time I step on the scale I’m now going to blame it on that dumb puppet. Forget about McDonalds… somebody should file a class action lawsuit against PBS for shamelessly promoting the consumption of cookies without informing us the long term consequences. 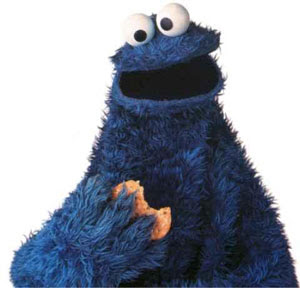 What about Oscar the Grouch… why is he so darn depressed… and what is he doing playing around in the garbage can? It’s no wonder we have introverted kids nowadays that hate sunshine and love to criticize everything good in life. If your kid dresses poorly or needs some counseling… don’t blame the video games… blame Oscar!

Then you have Grover… that lovable blue Muppet that loses his cool way too often. Do I want really my kids watching an otherwise kind fur ball losing his temper? I’m just glad that Burt and Ernie weren’t featured in the episode that we watched… my wife informed me of their complex lifestyle situation the next day.

As you might have guessed, Sesame Street will not be featured in the prime rotation at our household anytime soon. At the end of the day it has nothing to do with funky music or dysfunctional puppets… but everything to do with boredom. The kids were sick and tired of Sesame Street after 10 minutes… perhaps they’re still a little young for Sesame Street (Abby turns 3 later this month)… but even that geek on Blue’s Clue’s can keep them interested for 20 minutes by writing in his handy-dandy notebook… so I’m a little surprised that Sesame Street failed so badly. Tonight I’ll probably throw in Dora the Explorer for the kids and make myself some cookies.