I’ve got to admire my friend and classmate John McPhie. Tonight he took a ridiculously bold stand in front of our entire EMBA class arguing why he would SUE THE CRAP out of the fictional Alven Feng, owner of Global Services Company for counterfeiting and distributing a discontinued brand of high-end pens. While everyone else in the class voted to negotiate some sort of arrangement, John stood by his decision to bombard Mr. Alven Feng with a variety of lawsuits and international litigation… Wrong Decision… OF COURSE… but John so boldly and humorously articulated his point of view that he earned an applause from the class (pretty rare). John would have been a wonderful trial lawyer. 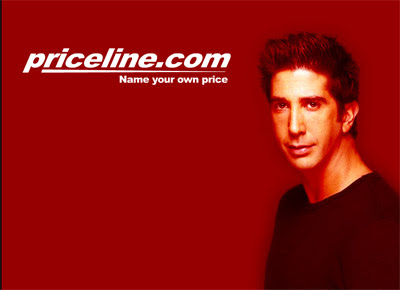 I very much admire BOLDNESS… especially if it’s done in the eloquent manner which John demonstrated tonight. Last fall I took a BOLD stand while working on a case project for Priceline.com. I decided that Priceline should completely change its marketing strategy by firing William Shatner, changing the company logo, and hiring David Schwimmer as the new spokesperson. When I presented the new Priceline brand strategy (see image above) to the panel of BYU faculty members they didn’t like it a bit. During the question and answer session they lit into me like a drill sergeant. I felt like crap about the whole thing for a while… until I got an A on the project.

So I guess BOLDNESS has its place sometimes… even if you’re totally wrong.