Everyone knows that the female species tends to cry a lot… it might be during a chick flick… or listening to a testimony in church… or perhaps even during the middle of an argument… the simple fact is most girls cry… and that’s just life. My theory is that guys are much less predictable than women when it comes to shedding tears. We of the male species run the entire gamut… some guys claim to never cry at all… and other guys (like my wonderful father-in-law) tend to cry on a weekly basis. 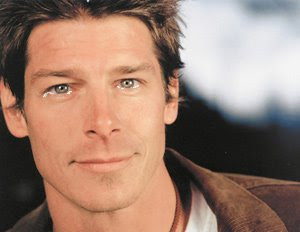 You can never tell just by looking at a man whether or not he is a cryer… My father-in-law is a big-brown-haired-6ft-2inch-teddy-bear-meat-eating-dog-loving-go-to-the-ball-game-and-cuss-at-the-referee type of guy…. But he can’t hold back the tears when watching an episode of ABC’s Extreme Home Makeover. If you ever want to see a grown man cry… just show up at his place on a Sunday night around 7:45pm… just as Ty Pennington yells “move that bus!”
Then you have the NEVER-CRY-GUY… the man who claims he has never shed a tear in is whole life (which to me seems a little wierd). I understand that us guys are wired differently than women… and on the whole we cry much less than our female counterparts. But for a man to claim he’s never been emotional in his entire life? Come on! Didn’t you ever watch WHERE THE RED FERN GROWS as a kid? What about OLD YELLER?
Personally I fall in the middle of the spectrum… Ty Pennington and his design team will probably never push my emotions over the threshold… but about once every year the most random thing will touch of my emotional side and get me weepy eyed. Two years ago there was a news story about a family in Price, Utah who lost their two kids when a flash flood swept their car away during a Sunday afternoon drive… by the end of the news report I was sobbing. Then last summer there was an article in the newspaper that really turned my heart… I was teary eyed by the end of the first paragraph… and couldn’t finish the article. Here’s a link to the article… go ahead and try yourself.
It’s not too often a movie will touch off my emotions. I remember being moved to tears the first time I saw Braveheart about 10 years ago…. but generally speaking I’m not a big-movie-guy and I am severely allergic to historical chick-flicks… 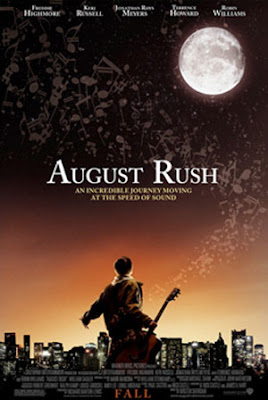 Naturally I wasn’t expecting anything out of the ordinary when I tossed in the DVD and began watching the movie AUGUST RUSH with my wife last weekend. Needless to say, I was sucked in and spit out by the time the movie was finished. For some reason AUGUST RUSH really hit a chord with me that night… and I was definitely teary eyed during the dramatic final scene. I can honestly say I haven’t been THAT moved by a fictional story in quite some time.
Had I read the back cover of the DVD package I might have gotten a clue as to what was coming… I tend to be a sucker for movies with a sentimental-destiny-driven storyline (my favorite movie of all time is BACK TO THE FUTURE… and I even enjoyed SERENDIPITY the whimsical chick-flick from a few years back).
For those of you who have never seen AUGUST RUSH… I highly recommend it. The movie is a fictional drama… about an orphan boy trying to find his parents through music. The plot is total fiction and they storyline is somewhat predictable… but it’s an intriguing adult fairy tale that features some great acting and some wonderful music throughout. Obviously not everyone who watches AUGUST RUSH will be moved to tears… or even impressed with the movie at all… but it’s worth seeing at least once.
As for us guys… sometimes after we get emotional we tend question our own manliness. “DUDE… Why did I cry over that?” I guess that’s just natural. Personally I think it’s good to have some raw emotions every now and then. Several years ago when I was dealing with some personal issues I went through an emotional phase where I shed a few tears… and I think it helped me considerably. I guess you need to hit bottom every now and again to appreciate the more happy times.
Of course the good news for me… those unpredictable tears are out of my system for a while. Sometime in the next few weeks I’ll probably be over at my in-laws home on a Sunday night… and as Ty Pennington turns a ghetto home into a grand mansion for a unfortunate family… the Kleenex tissues will undoubtedly start to disappear. So what will I do? I’ll just lean back and nod my head with appreciation… and perhaps crack a little smile… because I know that in the grand pecking order of crybabyness… I still have a long ways to go before I reach the level of my father-in-law.