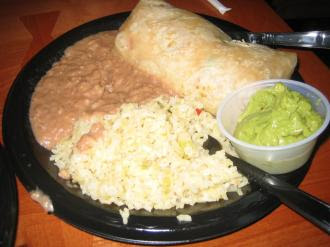 Sure… you may get a good sandwich on the East Coast… but good luck finding any decent Mexican food. I guess our Mexican friends must lose their cooking abilities the further they travel away from their homeland. As an adult I’ve lived about 3 1/2 years in Eastern United States… and I can’t ever remember devouring a decent enchilada…. it’s pretty much Taco Bell or BUST once your east of Kansas. It’s like there’s a vicious cycle going on in the East… nobody likes Mexican food because there are no good Mexican restaurants…. yet there are no good Mexican restaurants because nobody likes Mexican food… the whole thing is just an absolute shame!

Funny thing is that when I worked in Bethesda, Maryland… I found a California Burrito place that was relatively good. Occasionally I went there for lunch and brought it back to work… I’ll never forget the crazy looks my co-workers gave me… they thought I was eating some sort of martian food… I couldn’t believe how reluctant everybody was to even trying a measly little chicken burrito for lunch… Easterners are scared of the stuff… try asking them what a chimichanga is and they’ll probably tell you it’s a new brand of bubble gum. Maybe it’s a little ridiculous… but GOOD MEXICAN FOOD was honestly something that nearly topped the list of good reasons to move from Washington DC back to Utah.

My Theory is the quality (and availability) of Mexican food is directly correlated to your geographical location in the United States… The further West = The better the Mexican Food.
Look for an upcoming theory relating to the different genres of Mexican food here in the West.