Skip to content
My beloved father-in-law passed away on April 22, 2020 with a few close family members at his bedside. Dave was an amazing man and had a huge impact on my life. Here are some thoughts I wrote down to share…

It was March 1, 2004. A cold, winter Monday… but I had a certain item burning a hole in my pocket. For over two weeks I had been waiting for a custom engagement ring to arrive by mail. The ring was scheduled for delivery sometime around Wednesday, but to my surprise, the package arrived two days early. I inspected the ring for about 10 minutes then put it in my pocket. My focus was gone… it was so obvious that I couldn’t wait several days to propose – it would have to be tonight!

I quickly made reservations at a fancy restaurant – I’d pop the question to Laura days before she was expecting and the whole thing would be a big surprise! Only one thing left – I had not yet spoken to Dave Creer, my prospective father-in-law, about my intentions. I called him up and told him I was coming up to ask a question… which he clearly knew was “the” question. Driving up to see Dave I wasn’t too nervous. I had spent a fair amount of time with Dave over the previous few months that I had been dating Laura. In my mind, this would be a 5-minute conversation and congratulations… then I’d be on my way. Little did I know that Dave had other plans… as he insisted we go out to dinner for a talk. All of the sudden I was a bit nervous about the situation. Less than 15 minutes later we were sitting in a diner discussing the greatest mysteries of the universe: life and women. Never mind that I had formal dinner reservations with Laura an hour later. 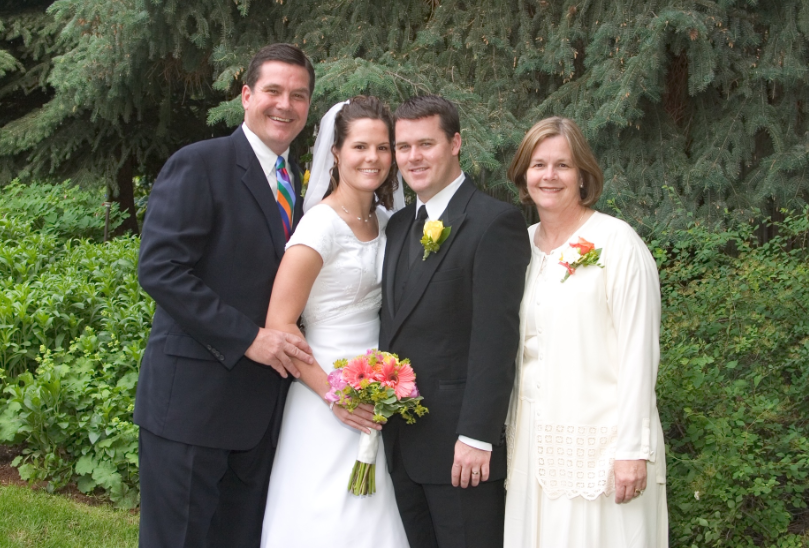 I remember that conversation with Dave very well, but more importantly I remember the way I felt. It could have been a difficult conversation… it wasn’t. Dave’s tone and body language said as much as the words coming out of his mouth. He could talk about serious and hard things and do so in a loving and supportive way. Dave was in my corner and wanted the best for me – he made it clear that night and I have never forgotten. One thing we discussed that evening was priorities. It’s a lesson Dave has taught me through example ever since that night. It’s also a lesson (quite frankly) I haven’t always learned so well. Dave had incredible balance in his life… he was perhaps the best man I’ve ever known at giving the proper attention and priority to so many different aspects of life and balancing them all so well…. from family, children, and grandchildren… to church, career, community, and service to others. Even sports, collections, hobbies, and travel. Dave knew when to work hard and knew when to have fun. He knew when to laugh and when to cry. Dave was remarkably well rounded in so many phases of life. Through the years we shared many memories, whether at the beach in California, river rafting at Mack’s Inn, attending Utah football games, or nights out with the ladies enjoying a steak dinner and the symphony. 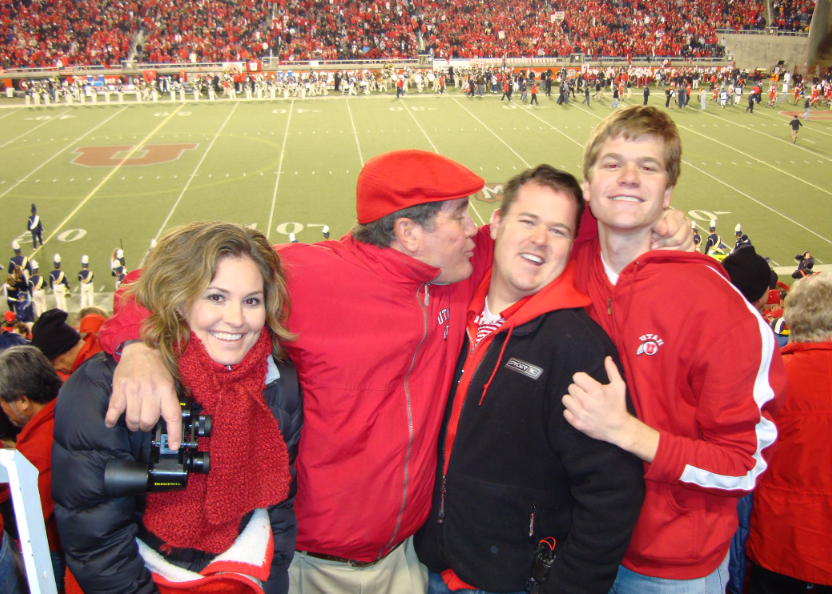 I’ll forever be grateful for the support Dave showed to me when I was going through a difficult time in my career during the recession in 2009-2010.. Along with the encouragement and advice, Dave knew (perhaps from going through a similar experience early in his own career) that sometimes you just need a distraction – something fun to help relieve the stress. Dave picked me up one day and took me to a Paul McCartney concert during (what was) a particularly hard month. We sang our hearts out that night… it may have been the best concert I ever attended. Partly because of the music, the other part because of the company. That night buoyed me up more than he knows. 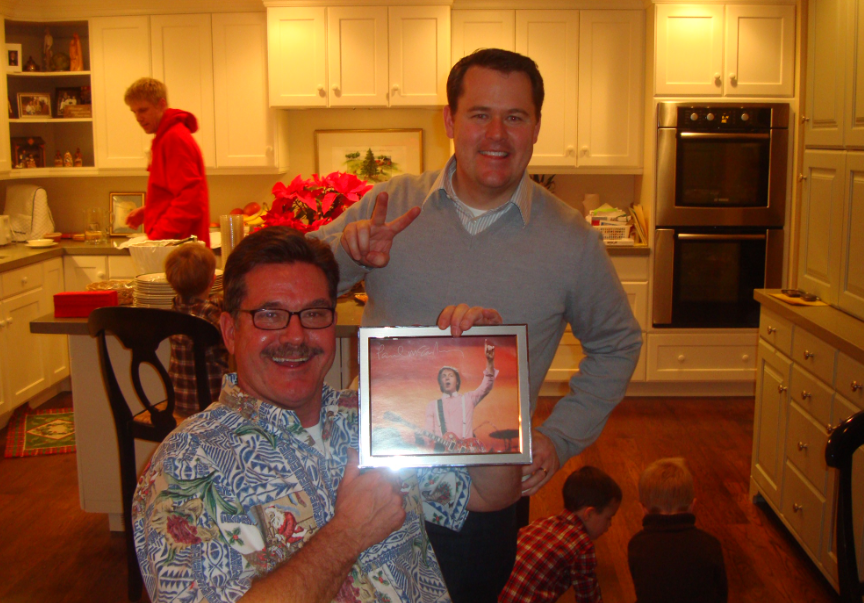 Over the course of many years, Dave taught me a masterclass on how to live the Golden Rule: Do unto others as you’d have them do unto you. Dave treated the people in his life, whether a stranger or a friend, the exact same. Regardless of one’s wealth, social status, church position, education, political affiliation, or sexual orientation… Dave treated everyone with the same warmth, kindness, and respect. His enthusiasm, optimism, and humor were an anecdote that far outweighed his flaws. Dave was allergic to condescension and smugness… because of this, Dave counts his friends not with his fingers or even by the dozens, but by the hundreds. Dave and Joan were very much in their element as they served their two missions, first at Temple Square in Salt Lake City, then in the UK. I had the opportunity to visit them a few times in the UK and I saw first hand how they loved and cherished the work they were doing. Somehow their humble flat on the outskirts of Birmingham, England felt like home. My heart swells a little bit when I think about the visit Laura and I made to see Dave and Joan in the UK in June of 2016. In many ways we had the perfect weekend – touring London, eating at some great restaurants, even catching a broadway musical at a theater in London’s West End. 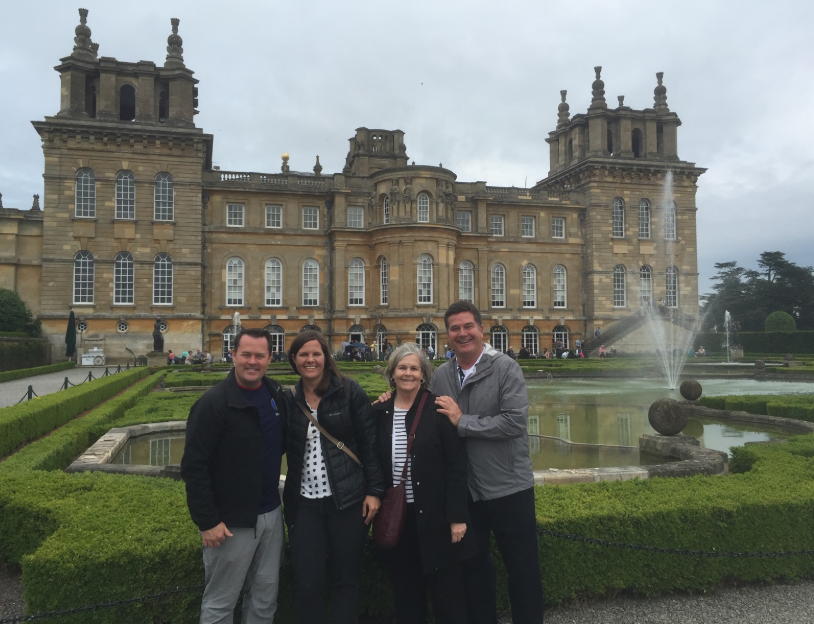 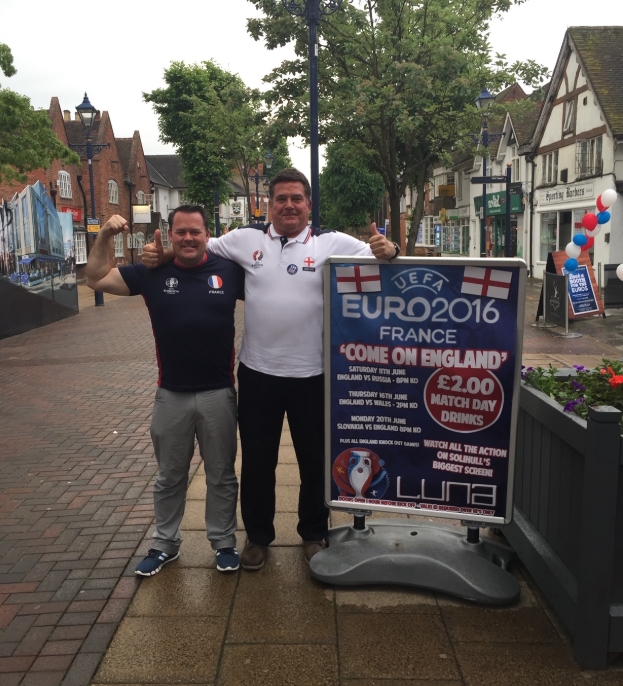 Unfortunately, that was also the weekend I found out my own grandmother had passed away from a long battle with cancer. Little did I know at the time, it would be the last weekend I would ever spend with a healthy Dave Creer… as cancer would soon invade his life. The next time I saw Dave was in a hospital bed four months later after he contracted Leukemia. Sadly, far too many visits with Dave over the 3+ years have been with him in a hospital bed. Early in Dave’s cancer battle a few of us grew out mustaches to show our love and support as he battled to regain enough strength to return home from his LDS mission. I created a collage of family members and famous celebrities with mustaches which I gave to Dave shortly after he and Joan arrived back on November 1, 2016. Dave got a kick out of it… and it was a great joy to see him somewhat recover from the cancer for a period, even though the recovery was not full and road was far from easy.

Despite Dave’s brief period of recovery after the bone marrow transplant, his health deteriorated in mid-2018. The 18 months that followed were a brutal rollercoaster ride for both Dave and the entire family with seemingly more lows than highs. Then in February 2020 there was testing and a prognosis from the doctors – Dave had only a few weeks to live. Tears were shed and the family scrambled to make final plans. Yet, through all of this there was some serendipity… perhaps even a small miracle. A celebration of life party was planned for Dave on February 29th. Plans started somewhat modest, but as word got out… those who count Dave as a friend RSVP’d. In the end, hundreds showed up to fill a church gym and personally tell him goodbye. Little did we know at the time that within 2 weeks the coronavirus pandemic and social distancing would essentially lockdown the planet and prevent any traditional funeral from happening. There’s peace and gratitude among the whole family that a man such as Dave, so beloved by so many, was able to have a celebration and fitting goodbye just before it would become an impossibility. In-laws often get a bad reputation. Perhaps because there’s no blood relation – it’s assumed that the love is conditional. In reality, I’m not sure that’s the case. Dave has been one of my greatest supporters and closest people in my life over the last 16 years. I’ll forever be sad that cancer stole the next 16. As phases of life move from one to the next…as 20’s turn into 30’s turn into 40’s… I look at my own life and think of how different it is now compared to that cold March night in 2004. I think of how blessed I am that Dave influenced my life. I’ll forever remember his voice and his laughter. Dave was always in my corner and showed me “love is all you need.” He was my last great mentor… someone who taught me how to add the polish and shine to my own life. God Speed Dave. Love you.